A few updates in my world history maps...

I've now got 39 world history maps online, from 1300 BC to 1500 AD. The website is http://www.worldhistorymaps.info/. The maps cover the "old world" (Eastern Hemisphere) during every 100 years and several key points in history.

The Eastern Hemisphere in 1300 BC,
during the height of the Egyptian Empire 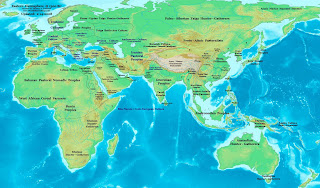 It took me a lot of time and research to make these maps, especially because sources often conflict, and I make corrections when new information comes my way. The maps aren't perfect (show me ANY perfect history map!). But they are as accurate as possible and updated whenever new, verifiable information is available to me.

So check them out; they show a view of history that is valuable but rarely seen. It gives you a better understanding of history when you can see the BIGGER picture during any given year.

Ever since I was a kid, my dad collected antique trucks. By 2001 he had several of them. Then a petty Shawnee County health inspector decided he didn't like my dad competing with some local landfills by allowing clean rubble dumping on our property. So the County took my dad to court charging him with misc. nuisances. One of which targeted my dad's collection of antique trucks. The Judge ordered my dad to "pick the trucks up". So he did!

He put them in the ground pointing up to the sky, painted them, and called them "Truckhenge". He's added several metal and beer-bottle sculptures, some boats, and more. The whole farm is really pretty cool.

The TV show "Rare Visions and Roadside Revelations" has taped the farm, and KDHE featured Truckhenge in its "Get Caught Recycling" campaign. There is also a nice video of Truckhenge at the http://www.roadsideamerica.com/ website and a good section about it at http://www.kansastravel.org/.

This Thursday, Feb. 21, 2008, there is a TV crew from Sweden that will come to Topeka to tape the Farm. Is that cool or what? My dad has definitely made a name for the farm and for himself. And believe me, it is a real cool grassroots arts park. He's happy to give tours, just make sure to stop at the house and he'll take you on a tour.

For more information, check out the official Truckhenge website, at
www.thomaslessman.com/LessmanFarm/ .

Talessman
Topeka, Kansas, United States
Thomas Lessman is a Computer Specialist, Citizen Activist, and amateur Historian from Topeka, KS. His website is www.ThomasLessman.com. The Neighborhood Watch Watch is one of the ways I share my work and thoughts with the rest of the world. I believe it is important to speak out and stand up for your beliefs. And I do it as best as I can. Whether you agree with my views or not, I appreciate knowing how you feel about these topics. Please be respectful and keep it clean, and I shall do the same in return.